An ariticle about Guru Padmasambhava 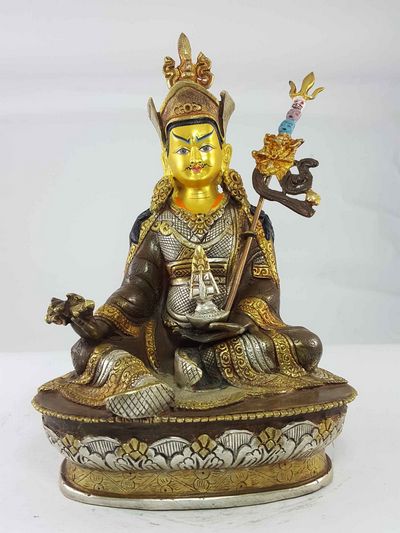 Padmasambhava was a historical teacher who is said to have converted Tibet to Buddhism. He was a renowned scholar, meditator, and magician, and his mantra suggests his rich and diverse nature.
Padmasambhava, Means The Lotus-Born, was a sage guru from Oddiyāna who is said to have transmitted Vajrayana Buddhism to Bhutan and Tibet and neighboring countries in the 8th century. In those lands he is better known as Guru Rinpoche ("Precious Guru") or Lopon Rinpoche, or, simply, Padum in Tibet, where followers of the Nyingma school regard him as the second Buddha. He said: "My father is the intrinsic awareness, Samantabhadra. My mother is the ultimate sphere of reality, Samantabhadri. I belong to the caste of the non-duality of the sphere of awareness. My name is the Glorious Lotus-Born. I am from the unborn sphere of all phenomena. I consume concepts of duality as my diet. I act in the way of the Buddhas of the three times."

The khatvanga, a danda with three severed heads denoting the three kayas (the three bodies of a Buddha: the dharmakaya, sambhogakaya, and nirmanakaya), crowned by a trishula and dressed in a sash of the Himalayan Rainbow or Five Pure Lights of the Mahabhuta is a particular divine attribute of Padmasambhava and intrinsic to his iconographic representation.
His two eyes are wide open in a piercing gaze. On his body, he wears a white vajra undergarment and, on top of this, in layers, a red robe, a dark blue mantrayana tunic, a red monastic shawl decorated with a golden flower pattern, and a maroon cloak of silk brocade. He has one face and two hands.
In his right hand, he holds a five-pronged vajra at his heart; and in his left, which rests in the gesture of equanimity, he holds a skull-cup in the center of which is a vase of longevity filled with the nectar of deathless wisdom. Cradled in his left arm is a three-pointed khatvanga representing the consort Mandarava. On his head, he wears a five-petalled lotus hat. Wrathful and smiling, he blazes magnificently with the splendor of the major and minor marks. He is seated with his two feet in the royal posture.

According to tradition, Padmasambhava was incarnated as an eight-year-old child appearing in a lotus blossom floating in Lake Dhanakosha, in the kingdom of Oḍḍiyāna, traditionally identified with the Swat Valley of South Asia in present-day Pakistan. His special nature was recognized by the childless local king of Oḍḍiyāna and was chosen to take over the kingdom but he left Oḍḍiyāna for Northern parts of India. In Rewalsar, known as Tso Pema in Tibetan, he secretly taught tantric teachings to Mandarava who was the local king's daughter. The king found out and tried to burn him but it is believed when the smoke cleared he was intact and in meditation. The king offered Padmasambhava his kingdom and Mandarava. He left with Mandarava and later in Maratika cave in Nepal, after practicing secret tantric consort rituals, Amitayus appeared and they both achieved immortal bodies in the form of the living rainbow body of the Great Transference which is completely different and much rarer than a dead body dissolving into light or the more usual rainbow body of a living yet mortal human as sometimes still achieved by Dzogchen practitioners of Padmasambhava's terma. So both Padmasambhava and Mandarava are still believed to be alive and active in Phowa Chenpo form by their followers. She and Padmasambhava's other main consort, Yeshe Tsogyal who was responsible for hiding his numerous terma later in Tibet became fully enlightened. Many thangkas and paintings show Padmasambhava in between them.

His fame became known to Trisong Detsen, the 38th king of the Yarlung dynasty, and the first Emperor of Tibet (742797), whose kingdom was beset by evil mountain deities. The king invited Padmasambhava to Tibet where he used his tantric powers to subdue the evil deities he encountered along the way, eventually receiving the Emperor's wife, identified with the Dakini Yeshe Tsogyal, as a consort. This was in accordance with the tantric principle of not eliminating negative forces but redirecting them to fuel the journey toward spiritual awakening. In Tibet he founded the first monastery in the country, Samye Gompa, who initiated the first monks and introduced the people to the practice of Tantric Buddhism.

In Bhutan, he is associated with the famous Paro Taktsang or "Tiger's Nest" monastery built on a sheer cliff wall about 500m above the floor of Paro valley. It was built around the Taktsang Senge Samdup (stag tshang seng ge bsam grub) cave where he is said to have meditated in the 8th Century. He flew there from Tibet on the back of Yeshe Tsogyal, whom he transformed into a flying tigress for the purpose of the trip. Later he traveled to Bumthang district to subdue a powerful deity offended by a local king. Padmasambhava's body imprint can be found in the wall of a cave at nearby Kurje Lhakhang temple.

Padmasambhava also hid a number of religious treasures (termas) in lakes, caves, fields and forests of the Himalayan region to be found and interpreted by future tertöns or spiritual treasure-finders. According to Tibetan tradition, the Bardo Thodol (commonly referred to as the Tibetan Book of the Dead) was among these hidden treasures, subsequently discovered by a Tibetan terton, Karma Lingpa.

Tantric cycles related to Padmasambhava are not just practiced by the Nyingma, they even gave rise to a new offshoot of Bön which emerged in the 14th century called the New Bön. Prominent figures of the Sarma (new translation) schools such as the Karmapas and Sakya lineage heads have practiced these cycles and taught them. Some of the greatest tertons revealing teachings related to Padmasambhava have been from the Kagyu or Sakya lineages. The hidden lake temple of the Dalai Lamas behind the Potala called Lukhang is dedicated to Dzogchen teachings and has murals depicting the eight manifestations of Padmasambhava. Padmasambhava established Vajrayana Buddhism and the highest forms of Dzogchen (Mengagde) in Tibet and transformed the entire nation.

On Padmasambhava's consort practice with Princess Sakya Devi from Nepal it is said: "In a state of intense bliss, Padmasambhava and Sakyadevi realized the infinite reality of the Primordial Buddha Mind, the All-Beneficent Lord (Samantabhadra), whose absolute love is the unimpeded dynamo of existence. Experiencing the succession of the four stages of ecstasy, their mutual state of consciousness increased from height to height. And thus, meditating on Supreme Vajrasattva Heruka as the translucent image of compassionate wrathful (energized) activity, they together acquired the Mahamudra of Divinity and attained complete Great Enlightenment

Padmasambhava is said to have taken eight forms or manifestations representing different aspects of his being - wrath, pacification, According to Rigpa Shedra the eight principal forms were assumed by Guru Rinpoche at different points in his life. The Eight Manifestations of Padmasambhava belong to the tradition of the Revealed Treasures

Guru Orgyen Dorje Chang The vajra-holder , shown dark blue in color in the attire of the Sambhogakaya. Depicted in union with consort.

Guru Shakya Senge of Bodh Gaya, Lion of the Sakyas, who learns the Tantric practices of the eight Vidyadharas. He is shown as a fully ordained Buddhist monk.

Guru Pema Gyalpo of Uddiyana, the Lotus Prince, king of the Tripitaka. He is shown looking like a young crowned prince or king.

Guru Pema Jungne Lotus-arisen, the Saviour who teaches the Dharma to the people. He is shown sitting on a lotus, dressed in the three robes of a monk, under which he wears a blue
shirt, pants, and heavy Tibetan boots, as protection against the cold. He holds the diamond-scepter of compassionate love in his right hand and the yogi's skull-bowl of clear wisdom in his left. He has a special trident called khatvanga of a wandering Yogi and wears on his head a Nepalese cloth crown, stylistically designed to remind one of the shapes of a lotus flower. Thus he is represented as he must have appeared in Tibet.

Guru Loden Chokse of Kashmir, the Intelligent Youth, the one who gathers the knowledge of all worlds. He is shown in princely clothes, beating a hand-drum and holding a skull-bowl.

Guru Nyima Ozer , the Sunray Yogi, who illuminates the darkness of the mind through the insight of Dzogchen. He is shown as a naked yogi dressed only in a loin-cloth and holding a Khatvanga which points towards the sun.

Guru Dorje Drolo, the fierce manifestation of Vajrakilaya (wrathful Vajrasattva) known as "Diamond Guts", the comforter of all, imprinting the elements with Wisdom-Treasure.

Guru Senge Dradog of Nalanda University, the Lion of Debate, promulgator of the Dharma throughout the six realms of sentient beings. He is shown in a very fierce form, dark blue and imitative of the powerful Bodhisattva Vajrapani, holding a thunderbolt scepter in one hand and a scorpion in the other.

Deliver
Varies for international Shipping location
Dispatch
We normally dispatch the product in 1-2 business days. Else Buyer will be informed about the shipping.
Payment
Money Transfer and Bank Transfer
Return
7 days money back, buyer have to pay return shipping